Andhra Pradesh has made significant contributions to India’s traditional Horticulture crops cultivation. Increased area and production under Horticultural crops has put Andhra Pradesh in a stronger position in terms of attracting investments from   private sector.

Given that area and production of fruits and vegetables have been increasing steadily, Andhra Pradesh has the potential to increase its contribution towards the economy by way of exports There is a voluntary shift in the cropping pattern, as returns from  Horticulture per unit of land are higher in comparison to Agriculture. The Horticulture is climate resilient, therefore assures higher income to farmers. Due to changing Socioeconomic profile and increasing middle class coupled with higher per capita income this sector has more potential as food habits are changing and people are becoming more health conscious.

In Andhra Pradesh area under Horticulture crops is 17.84 lakh Hectors with a production of 312.34 lakh Metric Tons. Andhra Pradesh stands at 1st position in Chillies, Cocoa, Lime, Oil Palm, Papaya and Tomato, 2nd in Cashew, Mango and Sweet Orange in India. A.P. Ranks 1st in area and production of fruits and spices and 2nd in Micro Irrigation area coverage. 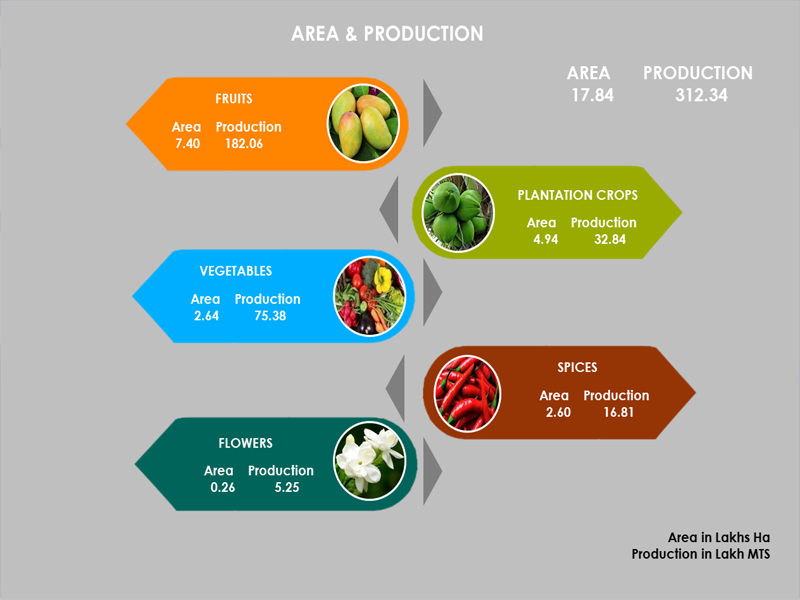